28th February 2010 – overcast NE1/2
Offshore
Early morning observations on the rising tide (0800-0900) were led by a Black-throated Diver, the first to be recorded for several years. Also seen were 20 Red-breasted Merganser, 10 Kittiwake, 8 Red-throated Diver, 8 Shag and 4 Common Scoter.
Grounded Migrants
Just 5 Fieldfare and a Redwing remained from yesterday.
Diurnal Migration
A couple of adult Whooper Swan headed south.
Wildfowl and Waders
The flock of 42 Barnacle Geese and a female Gadwall remain and waders included 7 Greenshank and 4 Black-tailed Godwit.
Miscellaneous
A flock of 50 Twite, 2 Raven and several Little Egret were also seen.
Posted by Walney BO at 21:01

Geese to the fore 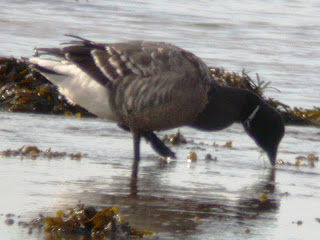 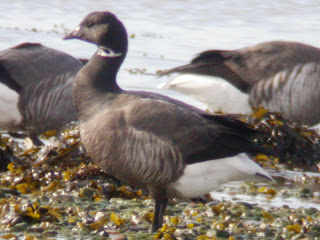 25th February 2010 – overcast E1/2/3
Ringing
While pale-bellied Brent Geese are regular visitors to the observatory recording area the small flock of dark-bellied birds which frequents Morecambe Bay generally remain on the periphery , only occasionally straying within range. A recent incursion saw three colour-ringed birds amongst the flock and details have recently been received. All had been ringed in a single catch at Terschelling, The Netherlands (600km ESE) on 17th May 2006 and have been seen in subsequent years at Terschelling and Ameland both in The Netherlands, however, this is the first time that the birds have been recorded in Britain.

22nd February 2010 – bright and frosty NE2
Grounded Migrants
Thrushes were once again prominent with 33 Redwing and 13 Fieldfare logged.
Wildfowl and Waders
The Brent Goose flock held 92 pale-bellied and 32 dark-bellied birds.
Miscellaneous
Five Little Egret and a group of 14 Twite were recorded.
Posted by Walney BO at 07:40

21st February 2010 – snow E1/2
Grounded Migrants
A Stock Dove was a good if rather unexpected result of the blizzard conditions early morning.
Wildfowl and Waders
A Greenshank was the only other bird of note recorded.
Images
With nothing visible images of the snow – a rare commodity on Walney Island – were the order of the day. A Hare is just about visible in the first image as it dashes across the track. 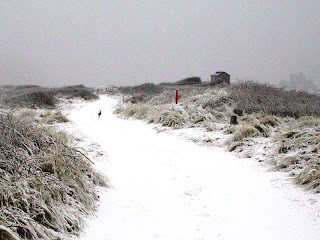 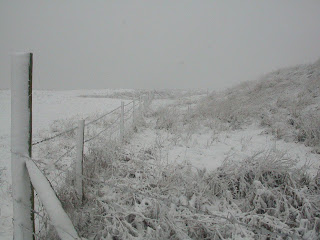 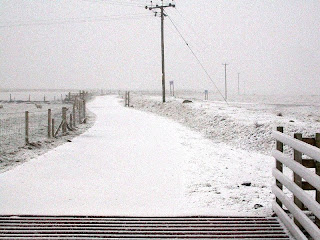 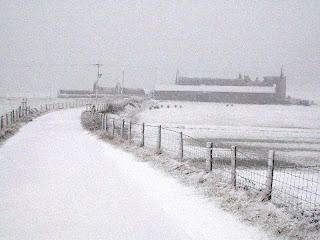 20th February 2010 – bright and frosty/calm then the fog rolled in
Grounded Migrants
Thrushes included 10 Song Thrush and a Redwing.
Wildfowl and Waders
A total of 27 Purple Sandpiper were seen along with several Greenshank. The Brent Goose flock held 60 pale-bellied birds.
Miscellaneous
Three Little Egret, 14 Twite and a Peregrine were logged.
Posted by Walney BO at 20:06

19th February 2010 – bright and frosty N1
Offshore
It was relatively quiet over the sea early morning (0900-0930) with just small numbers of Common Scoter, Razorbill and Red-throated Diver on the move.
Grounded Migrants
Thrushes were again prominent with 44 Redwing, 28 Fieldfare and 10 Song Thrush logged.
Diurnal Migration
Perhaps a visitor from the mainland rather than a true migrant, a Common Buzzard soared over the observatory late morning before drifting off northeast.
Wildfowl and Waders
A group of 10 Purple Sandpiper were the pick of the waders and 8 Shoveler were seen..
Miscellaneous
A group of 30 Twite were recorded along with Little Owl and Little Egret.
Posted by Walney BO at 16:03

18th February 2010 – overcast/mist/drizzle/calm
Rarities
A check of the flooded fields along Biggar Bank revealed a single Water Pipit.
Offshore
A Great Northern Diver was the highlight on the sea, also seen were 30 Red-breasted Merganser and 5 Red-throated Diver.
Grounded Migrants
A flock of 43 Fieldfare and a Mistle Thrush were presumably grounded by the poor conditions.
Wildfowl and Waders
The Brent Goose flock contained 100 pale-bellied individuals, including just one first-winter bird and, more unusually, 57 dark-bellied birds, including 5 first-winter birds. Waders included 300 Golden Plover.
Miscellaneous
Several Little Egret were the best of the rest.
Posted by Walney BO at 20:10

16th February 2010 – sunny spells and snow showers SW1/2
Offshore
A couple of early Gannet were the highlight of morning observations (0840-0940) which also provided 52 Common Scoter, 20 Red-breasted Merganser, 17 Kittiwake, 4 Red-throated Diver and 3 Razorbill.
Wildfowl and Waders
The Brent Goose flock again contained 118 pale-bellied individuals and 2 Gadwall were seen. Results of the monthly WeBS count included 280 Shelduck, 506 Wigeon, 120 Red-breasted Merganser, 2770 Oystercatcher, 660 Golden Plover, 236 Grey Plover, 370 Lapwing, 3565 Knot, 2560 Dunlin, 541 Curlew, 1060 Redshank and 183 Turnstone.
Miscellaneous
Odds and ends included 3 Little Egret and single Peregrine and Little Owl.
Ringing
The details of the colour-ringed Raven that has toured the island this winter have just been received. Not unexpectedly it is of Cumbrian origin having been one of four nestlings ringed at a site near Kendal in 2005.
Posted by Walney BO at 22:07

15th February 2010 – Fog then showers SW2
Wildfowl and Waders
The Brent Goose flock contained 118 pale-bellied individuals, including at least five colour-ringed birds. Of these, four are regularly returning favourites but the ringing origins of the fifth bird are at this time unknown but is perhaps an Icelandic ringed individual.
Miscellaneous
The flooded fields held 11 Rock Pipit but no Water Pipit over the tide and just 2 Little Egret were seen.
Posted by Walney BO at 21:42

More of the same

12th February 2010 – sunny spells NE1
Offshore
Early morning observations (0730-0830) were highlighted by 2 Velvet Scoter and a Great Northern Diver, also seen were 40 Common Scoter and 11 Red-throated Diver.
Grounded Migrants
A flock of 23 Fieldfare dropped in and a Collared Dove was perhaps a forerunner of spring migration.
Diurnal Migration
Several skeins of Pink-footed Geese totalling 330 birds headed north.
Wildfowl and Waders
The flock of 35 Barnacle Geese remain and waders included 2 Black-tailed Godwit and a Greenshank.
Miscellaneous
The pre-roost gathering of Little Egret contained 11 birds, a flock of 40 Twite were logged and both Peregrine and Merlin were seen.
Image
Record shot of today's Merlin 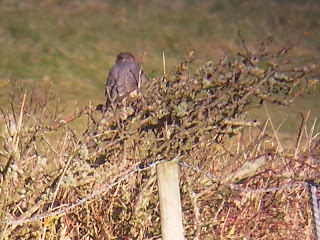 10th February 2010 – bright and frosty NE1/2/3
Grounded Migrants
A flock of 70 Fieldfare dropped in briefly early morning.
Miscellaneous
The pre-roost gathering contained 13 Little Egret, 2 Raven included the long-staying colour-ringed bird, the origins of which have yet to be revealed and a Merlin was seen.
Posted by Walney BO at 10:13

9th February 2010 – sunny spells NE1
Offshore
A single Shag was the pick of sightings.
Grounded Migrants
A group of 3 Mistle Thrush were new in and 10 Fieldfare remain.
Wildfowl and Waders
A flock of 40 pale-bellied Brent Geese were logged.
Miscellaneous
A pre-roost gathering of 15 Little Egret was the highest count of the year so far.
Posted by Walney BO at 07:48

Nights begin to draw out

7th February 2010 – Fog E1
Grounded Migrants
The dense fog again grounded a few thrushes with 45 Fieldfare and 3 Redwing logged.
Diurnal Migration
Flocks of Pink-footed Geese were regularly heard throughout the morning, however; only 130 birds were seen through the gloom with many more frustratingly remaining out of view.
Wildfowl and Waders
A Greenshank calling through the fog was the only record of note
Miscellaneous
At least 3 Little Egret continue to stalk the salt marshes and a single Water Rail squealed.
Posted by Walney BO at 19:02

6th February 2010 – Fog E1
Grounded Migrants
The dense fog grounded a few thrushes with 12 Fieldfare, 10 Song Thrush and 5 Redwing logged..
Miscellaneous
At least 4 Little Egret continue to stalk the salt marshes and a single Raven was logged. The first wave of Lesser Black-backed Gulls have now returned to the colony to stake out territories.
Images
Dawn over the island before the fog rolled in and a first-winter male Linnet. 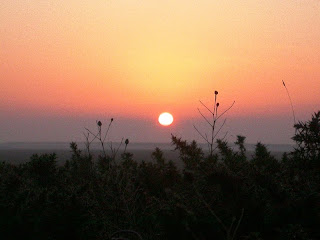 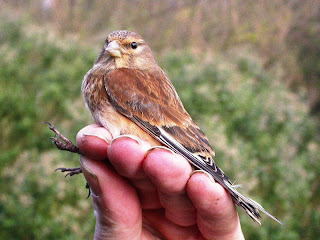 5th February 2010 – misty/murky ESE2
Wildfowl and Waders
A pair of Gadwall was amongst 250 Teal and 200 Wigeon.
Miscellaneous
A flock of 65 Twite, 2 Little Egret and a Merlin were the only other records of note logged.
Posted by Walney BO at 15:24

4th February 2010 – overcast SE2/3
Grounded Migrants
A total of 36 Redwing were probably the remains of yesterday’s influx, however; a Woodcock was new in.
Diurnal Migration
A skein of 30 Pink-footed Geese flew through.
Miscellaneous
Two Little Egret and a Merlin hunting a flock of 600 Starling were the only other records of note.
Posted by Walney BO at 17:15

3rd February 2010 – overcast/cold/snow later SE2/3
Offshore
Morning observations provided a huge raft of 5000 Eider feeding offshore along with 10 Shag and smaller numbers of Red-throated Diver and Common Scoter. A Great Northern Diver was along the eastern shore.
Grounded Migrants
Another influx of winter thrushes, perhaps pre-empting the snow, involved 100 Redwing, 24 Fieldfare and a Mistle Thrush.
Diurnal Migration
A total of 400 Pink-footed Geese and 2 Whooper Swan headed north.
Miscellaneous
Two Little Egret were the only record of note.
Posted by Walney BO at 19:35

2nd February 2010 – early rain WNW2/3
Offshore
Morning observations (0900-1000) proved less spectacular than of late with just small numbers of Red-throated Diver, Common Scoter and Kittiwake moving through.
Wildfowl and Waders
The Brent Goose flock held just 10 pale-bellied birds, 2 Scaup were amongst 30 Goldeneye and 20 Red-breasted Merganser while 3 Greenshank continue to linger.
Miscellaneous
A Jackdaw showing the characteristics associated with “Nordic Jackdaw” appeared briefly before flying northeast. The bird was then relocated later, at Roa Island and along the Rampside/Roa Island causeway and is presumably the same bird that was present in the area during the winter 2008/2009. In addition, a Water Rail called, 2 Little Egret were logged and 4 Raven tussled over carrion.
Images
“Nordic Jackdaw” 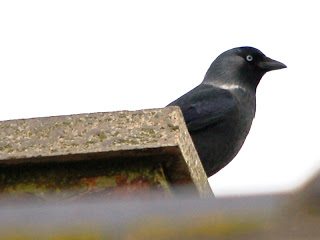 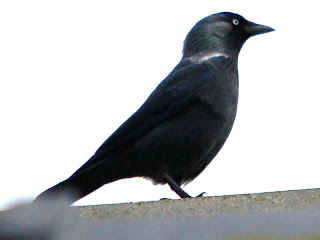 1st February 2010 - overcast showers WNW1/2/3
Offshore
Morning observations were highlighted by 2 northbound female Velver Scoter along with 18 Razorbill, 16 Red-throated Diver, 12 Common Scoter and a Merlin that flew in off the sea.
Grounded Migrants
Another influx of thrushes saw 32 Redwing and 19 Fieldfare logged.
Wildfowl and Waders
The Brent Goose flock contained 44 pale-bellied birds and other sightings included 2 Scaup and 2 Greenshank.
Miscellaneous
A Water Rail called.
Posted by Walney BO at 19:23

Around 300 species of bird have been recorded on Walney Island since the foundation of the bird observatory in 1964 and a recent survey has found that around 70 species are currently breeding within the area. To date, the observatory has trapped and ringed almost 140 species on the island. 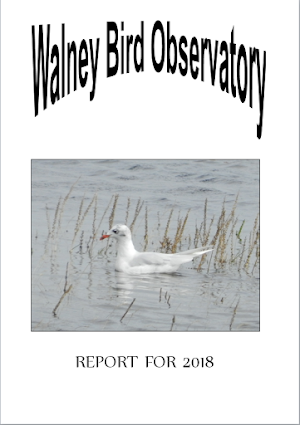 The 2018 report has just been published and contains a Bird and Ringing Report along with details of the Dragonflies, Butterflies, Moths and Mammals recorded on the island during the year. Available from the Membership Secretary for just £6.00 including postage and packing.