15th November 2009 - early rain then sunny spells S3/4
Rarities
A Grey Phalarope was found on the floodwater in the fields along Biggar Bank mid-morning. Efforts to relocate the bird mid-afternoon proved unsuccessful, however, there are now at least 4 Water Pipit favouring the area.
Offshore
Morning observations (0845-0945 & 1030-1100) produced 67 Common Scoter, 10 Kittiwake, 5 Razorbill, 3 Red-throated Diver and 3 Shag.
Diurnal Migration
A flock of 10 Whooper Swan flew through and a Rock Pipit was logged.
Wildfowl and Waders
Wildfowl included 7 Shoveler while at least 3 Greenshank remain.
Miscellaneous
At least 15 Little Egret continue to roam the island and 60 Magpie were counted going to roost. At least 2 Merlin remain and 15 Twite were logged.
Images
Grey Phalarope 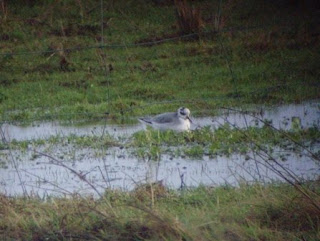 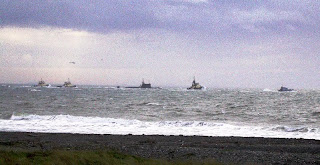