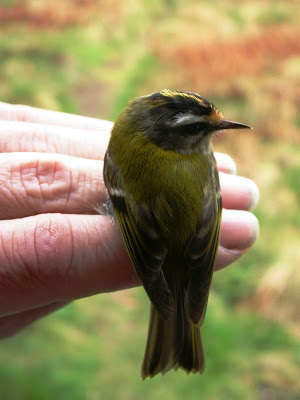 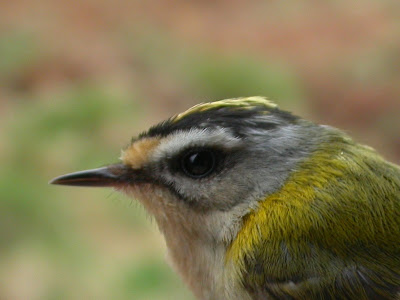 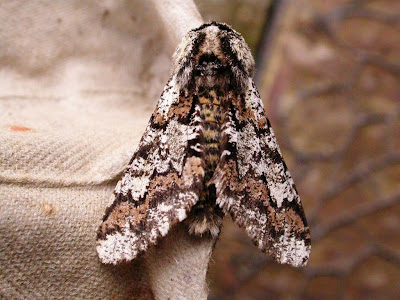 29th March 2011 – overcast/murky/drizzle soon NE1
Offshore
Just small numbers of Gannet and Razorbill were visible through the murk.
Grounded Migrants
Although the first Willow Warbler of the year arrived the only other evidence of grounded migrants involved 10 Pink-footed Geese and 3 Goldcrest.
Diurnal Migration
The steady trickle of Meadow Pipit and Pied Wagtail continues.
Miscellaneous
Single Barn Owl, Merlin and Little Egret were the best of the rest.
Moths
A Hebrew Character was the only moth to be attracted to the moth traps overnight.
Posted by Walney BO at 20:36

Lesser Redpoll new for the year

28th March 2011 – fog V1
Offshore
A Sandwich Tern called through the fog.
Grounded Migrants
Migrants remained thin on the ground with just 3 Goldcrest and a Chiffchaff logged.
Diurnal Migration
The trickle of Meadow Pipit and Pied Wagtail continues and 2 Lesser Redpoll – the first of the year were briefly grounded before disappearing back into the gloom.
Wildfowl and Waders
At least 39 pale-bellied Brent Geese continue to linger.
Moths
The moth traps held another Oak Beauty, a different individual from yesterday and the first Common Quaker of the year appeared.
Posted by Walney BO at 20:01

27th March 2011 – early mist W1/2/3
Offshore
A quick check over the sea produced the first 4 Sandwich Tern of the year, also seen were small numbers of Red-throated Diver, Shag, Common Scoter and Razorbill.
Grounded Migrants
Despite a misty start obvious migrants were rather thin on the ground with 4 Goldcrest, 3 Chiffchaff, 2 Fieldfare and a Wheatear logged.
Diurnal Migration
The trickle of Meadow Pipit and Pied Wagtail continues.
Miscellaneous
Two Little Egret and 2 Raven were the best of the rest.
Moths
The moth traps held an Oak Beauty, perhaps the same individual from a few days ago.
Posted by Walney BO at 19:57

25th March 2011 – bright and sunny/hazy N1/2/3
Grounded Migrants
A further small movement was evident with grounded birds including: 10 Goldcrest, 2 Chiffchaff, 2 Wheatear and a Redwing amongst an arrival of finches and thrushes. It is especially pleasing to see small numbers of Goldcrest moving through following an almost complete absence in the spring of 2010.
Diurnal Migration
A total of 7 Sand Martin flew north, however Meadow Pipit passage has yet to really kick in with just a further trickle of northbound birds interspersed with a few Pied Wagtail and Jackdaws. Four Collared Doves flew through early morning.
Miscellaneous
Raptors included 2 Little Owl.
Posted by Walney BO at 16:22

First Sand Martin of the year

24thMarch 2011 – bright and sunny SE1
Offshore
Morning observations produced 9 Red-throated Diver and a Shag.
Grounded Migrants
A small gaggle of 11 Pink-footed Geese were grounded early morning and other new arrivals included 5 Wheatear, 2 Goldcrest and a Chiffchaff.
Diurnal Migration
A flock of 23 Whooper Swan and a single Sand Martin flew north, otherwise passage was limited to a further trickle of Meadow Pipit and Pied Wagtail admixed with a few Jackdaws.
Miscellaneous
Raptors included Barn Owl and Peregrine.
Moths
Following on from the first island records in 2010 a Pale Pinion was again attracted to the moth trap overnight. A Red Chestnut was also new for the year.
Images
Pale Pinion 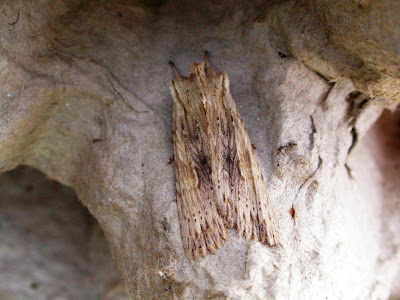 23rd March 2011 – dense fog through the morning then sunny W1
Grounded Migrants
The dense fog that persisted through much of the morning disappointingly produced very little in the way of grounded birds with 2 Robin and a Wheatear the only evidence of new arrivals.
Diurnal Migration
A trickle of Meadow Pipit and Pied Wagtail continued to move through in the morning gloom, however, as the fog lifted a group of 85 Whooper Swan headed north – this would appear to be the largest flock ever recorded over the island.
Miscellaneous
Two Raven and a Little Egret were again logged.
Moths
The moth traps attracted Red Sword-grass, Dark Sword-grass and Oak Beauty with the latter the second new species for the island so far this year.
Images
Oak Beauty 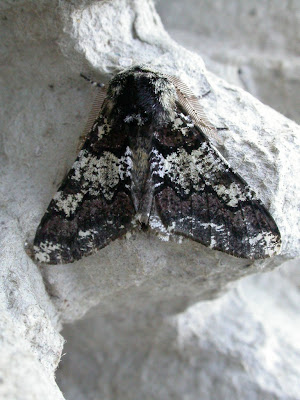 22nd March 2011 – sunny spells W1/2
Rarities
The Water Pipit, now in transitional plumage, was once again in the flooded horse paddocks near Biggar over the high tide period.
Offshore
A brief check over the calm sea early morning (0845-0915) was rewarded by a flock of 8 Little Gull (all adults) that flew high into Morecambe Bay. Also seen were 7 Red-throated Diver, 4 Shag and single Gannet and Kittiwake.
Grounded Migrants
A small increase in grounded birds was evident with 12 Goldcrest, 6 Fieldfare, 2 Redwing and single Wheatear and Chiffchaff logged.
Diurnal Migration
An exceptionally early Swallow flew through and 6 Pied Wagtail were amongst the first significant passage of Meadow Pipit with 100 birds recorded in intermittent observations through the morning.
Wildfowl and Waders
Waders included 520 Golden Plover and 10 Purple Sandpiper.
Miscellaneous
Two Raven and a Little Egret
Moths
The moth traps attracted Hebrew Character and Red Swordgrass.
Posted by Walney BO at 20:09

19th March 2011 – early mist SE1
Rarities
The latest round of high tides again saw the Water Pipit reappear in the flooded horse paddocks near Biggar over the high tide with the bird now starting to show the first hints of summer plumage.
Offshore
A calm sea revealed a few Red-throated Diver but nothing else of note.
Grounded Migrants
The female Black Redstart continues to linger and newly arrived birds included 2 Goldcrest and a Chiffchaff.
Diurnal Migration
A total of 50 Whooper Swan flew north (flocks of 10, 20, 14 & 6) along with small numbers of Meadow Pipit, Pied Wagtail and Siskin.
Wildfowl and Waders
There has been a noticeable departure of wildfowl in the last few weeks; however, waders included flocks of 780 Golden Plover and 46 Purple Sandpiper.
Miscellaneous
Three Little Egret were seen and raptors included Short-eared Owl, Barn Owl, Little Owl and Merlin.
Mammals
A Harbour Porpoise was offshore.
Posted by Walney BO at 16:29

Whooper Swans begin to move through

18th March 2011 – bright and sunny SE1
Offshore
Small numbers of Shag and Gannet were logged.
Grounded Migrants
Newly grounded migrants were at a premium in the clear conditions with just a single Goldcrest amongst a handful of Greenfinch, Goldfinch and Chaffinch.
Diurnal Migration
A flock of 5 Whooper Swan, 2 Siskin and a Great Spotted Woodpecker were seen amongst small numbers of Meadow Pipit and Pied Wagtail.
Miscellaneous
A group of 11 Twite, 3 Little Egret, 2 Little Owl and single Barn Owl and Merlin were the best of the rest.
Butterflies
The first Small Tortoiseshell was on the wing.
Posted by Walney BO at 15:53

17th March 2011 – early mist/drizzle SW1 then NW3/4
Offshore
There was little on show over the sea other than a few Razorbill.
Grounded Migrants
The damp and misty conditions in the morning produced a few grounded birds with a female Black Redstart taking top billing. Also seen were the first Goldcrest and Chiffchaff of the spring and three Fieldfare were amongst a small Blackbird influx.
Diurnal Migration
Two Siskin were logged along with small numbers of Meadow Pipit and Pied Wagtail.
Miscellaneous
Two Little Egret, 2 Raven and 2 Little Owl were the only other records of note.
Images
Yesterday’s Grey Shoulder-knot 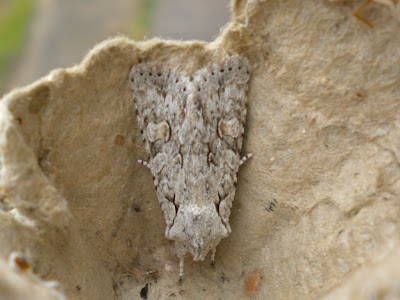 16th March 2011 – overcast NE1
Grounded Migrants
A Tree Sparrow was an unusual spring visitor early morning amongst small numbers of newly arrived Blue Tit, Blackbird and Chaffinch.
Diurnal Migration
Small numbers of Meadow Pipit and Pied Wagtail were logged.
Moths
Although operated nightly, there have been very few moths attracted to the moth traps so far during 2011 so a Grey Shoulder-knot was a surprise new addition to the island list.
Ringing
Recent news involves a Goldfinch controlled on the island on 17th October 2010 which had previously been ringed at Crosby Hall, Merseyside on 7th March 2010 (70km S).

View Walney_Goldfinch in a larger map

14th March 2011 – early frost/bright and sunny SE1/2
Grounded Migrants
After an early frost spring-like conditions took hold and single Wheatears were seen at two localities on the island
Posted by Walney BO at 20:03

Kittiwakes remain on the move

10th March 2011 – sunny spells/showers W5
Offshore
Morning observations (0800-0930) produced 605 Kittiwake, 44 Gannet and a Fulmar along with small numbers of Common Scoter, Razorbill and Red-breasted Merganser.
Grounded Migrants
A few Greenfinch and Blackbird were newly arrived.
Wildfowl and Waders
A solitary Pintail continues to linger and 5 Shoveler were logged.
Posted by Walney BO at 22:52

Kittiwakes on the move

9th March 2011 – sunny spells W5
Offshore
Morning observations (0800-1000) produced 420 Kittiwake, 11 Gannet, 10 Red-breasted Merganser, 7 Common Scoter, 6 Razorbill, 4 Red-throated Diver and a Fulmar.
Diurnal Migration
A group of Greenfinch were noted flying in off the sea.
Miscellaneous
Two Little Egret and a Raven were the only other records of note.
Posted by Walney BO at 20:59

Raven and Buzzard on the move

6th March 2011 – overcast then sunny S1/2
Offshore
Observations over the sea early morning produced a Gannet amongst small numbers of Red-throated Diver, Common Scoter, Razorbill and Guillemot.
Diurnal Migration
Perhaps 5 different Raven were seen including a group of three birds and single Buzzards moved northeast (1030hrs & 1320hrs) causing consternation in the gull colony.
Wildfowl and Waders
The flock of 24 Barnacle Geese continues to hold the Spitzbergen and Caerlaverock ringed birds and 5 Shoveler and 2 Pintail were also recorded. Waders included Greenshank and Black-tailed Godwit.
Miscellaneous
A total of 34 Twite were seen along with a single Little Egret.
Posted by Walney BO at 19:53 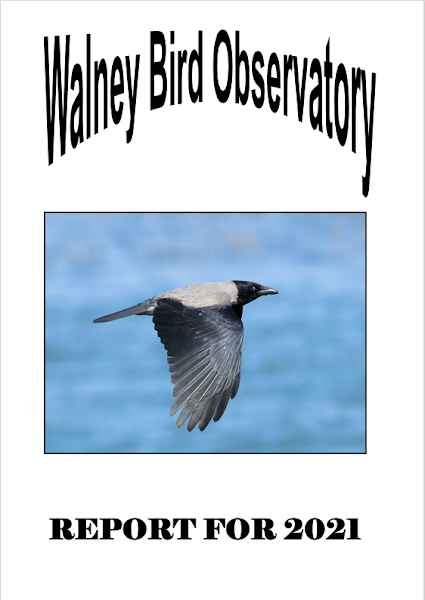