20th September 2013 – overcast/early showers W3
Rarities
A Red-breasted Flycatcher at a location with no general public access was a surprise for the ringers – remarkably after a flurry of sightings in the 1980s this is the first to be seen on the island for 25 years.
Offshore
Early morning observations over the sea (0700-0800) provided 93 Common Scoter and 4 Red-throated Diver.
Grounded Migrants
Excepting the Red-breasted Flycatcher there was little of interest with just 10 Robin, 4 Chiffchaff and a Goldcrest to provide the supporting cast.
Diurnal Migration
Evidenced by 300 Meadow Pipit, 30 Swallow, 6 Chaffinch, 5 Grey Wagtail, 5 Pied/White Wagtail and 2 Sand Martin. Five Pink-footed Geese were the first of the autumn.
Wildfowl and Waders
Several Greenshank were the pick of the waders.
Miscellaneous
A Barn Owl hunted the island at dawn.
Images
Red-breasted Flycatcher. 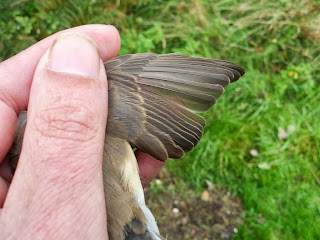 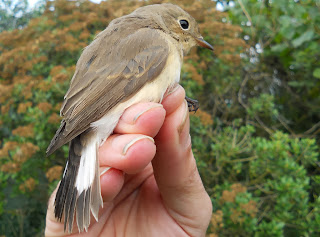