Offshore
Just small numbers of Gannet, Sandwich Tern and Razorbill were noted over the sea.
Grounded Migrants
A territorial Whitehroat was new for the year and 2 Lesser Whitethroat now hold territory, migrants included a total of 24 Wheatear along with 4 White Wagtail and 2 Blackcap.
Diurnal Migration
Small numbers of Swallow and Sand Martin trickled through.
Wildfowl and Waders
There are now 4 Gadwall present and waders included 3 Purple Sandpiper amongst 500 Turnstone, 17 Golden Plover and 5 Whimbrel.
Moths
Dotted Border and Pale Pinion were new in the moth trap – the latter the first for the island and following rapidly on from the island’s first Tawny Pinion.
Images
Pale Pinion 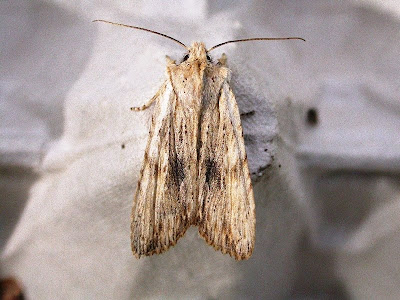