No news on Hudsonian Whimbrel 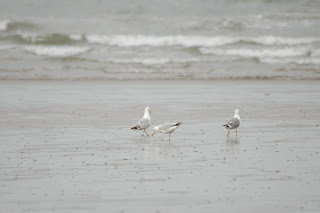 A quick check of the saltings failed to produce the Hudsonian Whimbrel, although the small early morning tide failed to push the Curlew flock with which it was associating up on to the saltmarsh. The Yellow-legged Gull remains but appears to have a slightly different wing tip pattern than would perhaps be expected.
Grounded Migrants
The Hooded Crow and a single Wheatear remain.
Diurnal Migration
A few House Martin and Swift flew through.
Wildfowl and waders
At least 5 Whimbrel were logged.
Images
Yellow-legged Gull with Herring Gulls
Posted by Walney BO at 19:43