Common migrants continue to move through 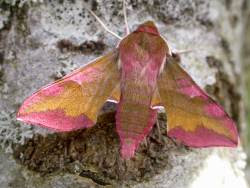 Wildfowl and Waders
A Greenshank was perhaps a passage bird and a flock of 200 Sanderling fed along the western shore. A total of 40 Whimbrel was a decrease on recent days.
Breeding Birds
There was another noticeable increase in the numbers of territorial Sedge Warbler, a less spectacular rise in Whitethroat numbers and ringing suggests a further Lesser Whitethroat arrival.
Moths
An increase in activity provided several new additions for the year including Shuttle-shaped Dart, Buff-tip, Flame Shoulder, Powdered Quaker and the impressive Small Elephant Hawk-moth.
Image
Small Elephant Hawk-moth
Posted by Walney BO at 19:46