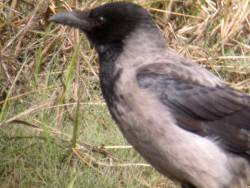 Fulmar and Gannet.
Grounded Migrants
An increase to 11 Wheatear hinted at a small movement despite the weather, although other sightings were limited to single lingering Lesser Whitethroat and Willow Warbler and the Hooded Crow.
Diurnal Migration
A few Swallow and a single House Martin were on the move.
Wildfowl and Waders
A total of 15 Whimbrel were located and the three Golden Plover remain.
Miscellaneous
A Little Egret continues to roam the island.
Images
Hooded Crow
Posted by Walney BO at 22:12